Would you like to switch to the accessible version of this site?

Don't need the accessible version of this site?

You and Your Pets are Part of Our Family

Dr. Brasher has been at Memorial Town & Country Animal Clinic since its inception. His previous practice, Memorial Animal Clinic, stood at the existing site of today's "MTCAC".

Dr. Brasher was born and raised in the small town of Weimar, Texas. Even as a small boy, he was intrigued by animals. On more than one occasion, his mother would get a call from his teacher asking "can you try to get your son to leave the critters at home!" This usually meant he had another snake or frog rolled up in the cuffs of his pants!

Dr. Brasher is a graduate of Texas A&M University, class of 1975. He attended Veterinary School at A&M, as well as graduating with honors in 1976. While there, he was a four year member of the Corps of Cadets.  His practice is primarily limited to small animals, but he occasionally treats a cow or two.

Dr. Brasher has many animal-related hobbies such as working a cattle ranch in Colorado County, and competing in field trials ( a retrieving competition) with his Labradors. He has a soft spot for the breed, but also has a menagerie of other pets that includes several cats, chickens, golden retrievers "Sunny "and "Dewey", and labs "River" and "Mercy", and a hound mix named "Maybelline".

If Dr. Brasher is not at the clinic, he is working at his ranch cutting weeds, making hay, or sometimes delivering a calf.

Dr. Peterson is originally from Washington state but after 47 years in Texas, he thinks he's a Texan. He has been in the greater Houston area for the past 42 years and refuses to leave Texas now.

He went to Texas A&M as all the best vets did and took special interest in horses and exotics as well as dogs and cats. After school he spent several years working almost exclusively on horses and still enjoys their company (which is a good thing as his wife of 23 years insists they have 1 or 2 at all times). Since then he has spent most of his efforts working with small animals and has studied on the use of ultrasound to diagnose problems and continues to seek more in depth studies in the field. If you have horses feel free to ask questions as he sometimes says he misses them and enjoys a good horse story now and then.

Dr. Edwards is at the clinic every Tuesday, Wednesday, and most Saturdays. She has worked as a relief veterinarian for the doctors at MTC since 1982.

Born and raised in Houston, Dr. Edwards lived on a farm near the Hobby Airport area. She is from a family of 10 children, and they had horses, chickens, and the occasional calf and pig. And of course, dogs and cats.

Dr. Edwards graduated from Texas A&M College of Veterinary Medicine in 1979. She worked in equine medicine in California and in Seguine, Texas, before beginning at a small animal emergency clinic in Houston in 1982. She began doing relief veterinary work, filling in when other vets had to be away from their practice.

Dr. Edwards has four 4-legged children - dogs "Camo", "Eze", "Skeeter" and "Skip". The doctors and staff are fortunate to have Dr. Edwards here as part of our clinic family. 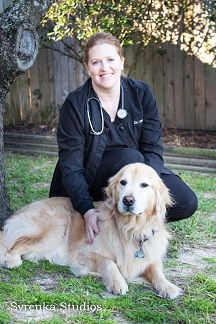 Dr. Inman has been a Veterinarian at MTCAC since 2013. Initially she worked here as a relief doctor but has been here full time since then.

She was born and raised in the Texas hill country, just outside New Braunfels, and moved to Houston in 2007, after graduating vet school from Texas A&M University. She is experienced in general practice, emergency medicine and exotics, but her passion is in providing: geriatric care, pain management, ultrasound and dentistry. You may see her around at St. Cecilia Catholic School where her husband works and her 2 children, Kylee and Maddie, attend school. Her pet family includes 3 golden retrievers, "George", "Heidi", and "Holly", and a cat named "Biscuit".  When Dr. Inman is in, you will usually find George under her desk, along with Heidi and Holly, lounging in her office (it is a sea of goldens).

In her spare time Dr. Inman enjoys playing or watching sports (especially her kid's sports), working-out, and doing just about anything outdoors with her family, or traveling to Disney World!

We look forward to hearing from you